A man was recently arrested for possession of a controlled substance after an inspection at a checkpoint. In a Salisbury Post report, authorities confiscated several bags of marijuana along with $6,000 worth of cash. Police said that they grew suspicious when they encountered the telltale scent of herb when the driver approached the checkpoint: 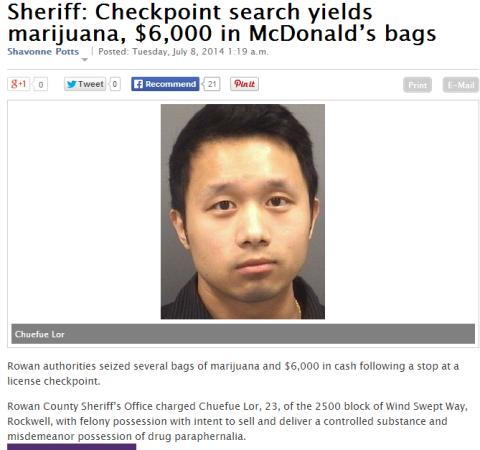 Officials conducted the checkpoint Wednesday around 1 a.m. at the intersection of Airport and Cedar Springs roads. The officer noted he could smell marijuana coming from the vehicle once the driver rolled down the window. The officer asked the driver, later identified as Chuefue Lor, to pull off the road to the side.

While Lor surrendered a bag of marijuana leaves upon inquiry, a further search yielded five more packages of the illegal substance in his car, as well as a smoking pipe. For this, he was charged with the felony possession with intent to sell and deliver a controlled substance, as well as misdemeanor possession of drug paraphernalia.

Anyone filed with these – or other drug-related charges – would do well to note that making contact with Salisbury, NC attorneys must be carried out at the soonest possible time. In Lor’s case, he was able to secure a bond issued for $5,000, and was therefore subsequently released from the Rowan County Detention Center, pending further investigation and charges. Because of the gravity of the charges, it would be ideal for the client to have legal representation by his side ASAP so he can be sure that his rights as a defendant are being protected.

Drug-related cases often take a long time to resolve, and are fraught with plenty of charges and counter-charges amid a flurry of investigations to determine the existence and degree of culpability. Complicating matters is the medical aspect of this type of case, which may take a while to complete and are usually subject to repeat examinations, as well as opinions from multiple experts.

Parties who are looking for and are in need of a capable and experienced Salisbury attorney to assist in criminal defense and expediting the proceedings for their drug cases can approach firms like Sherrill & Cameron, PLLC to get the legal help required.